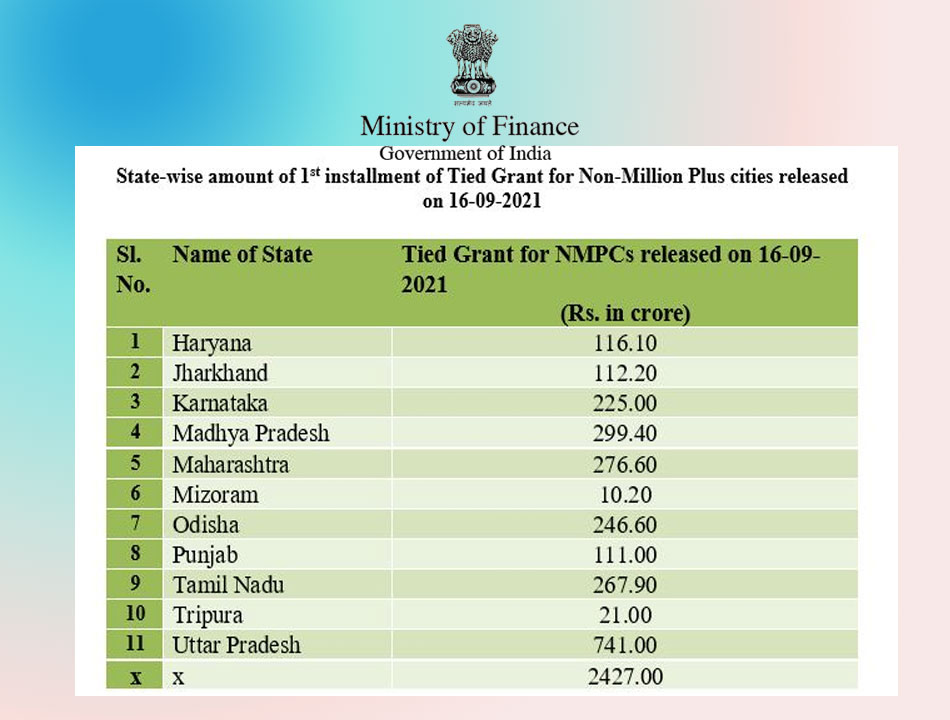 The Department of Expenditure, Ministry of Finance today released an amount of Rs. 2427 crore to 11 States for the Urban Local Bodies. This amount is the first instalment of tied grants for the year 2021-22, which are for the  Non-Million Plus cities (NMPCs) including Cantonment Boards.

In its reports the 15th Finance Commission, for a period of 2021-22 to 2025-26 has divided urban Local Bodies into two categories, one being the Million-Plus urban agglomerations/cities, excluding Delhi and Srinagar, and all other cities and towns with less than one million population, Non-Million Plus cities.  Additionally, it has also recommended separate grants for the Non-Million Plus cities.

Out of the total recommended grant, 40% is a basic or untied grant and the remaining 60% is a tied grant. While untied grants can be utilised for location-specific felt needs except for payment of salary and incurring other establishment expenditure, the tied grant is released for supporting and strengthening the delivery of basic services. Out of the tied grant, 50% is earmarked for ‘Sanitation Solid Waste Management and attainment of star ratings as developed by the Ministry of Housing & Urban Affairs (MOH&UA) and the remaining 50% is tied to ‘Drinking water, rainwater harvesting and water recycling.

The tied grant is specifically meant that Urban local bodies have required financials, over and above the funds allocated by the Centre and the State for sanitation and drinking water under various Centrally Sponsored Schemes and provide quality services to citizens.

State-wise amount of 1st instalment of Tied Grant for Non-Million Plus cities released on 16-09-2021 are,