India defeats England by an innings and 36 runs, clinch series 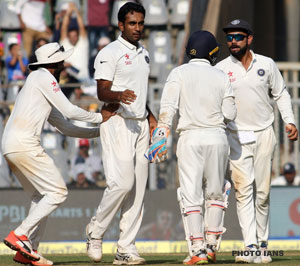 The Indian team defeated the England team by an innings and 36 runs in the fourth Test match in Wankhede Stadium and claimed the five test match series with 3-0.

In the morning session of the fifth day, England were bowled out for 195, after resuming on the overnight score of to 182/6 in their second innings.

Jonny Bairstow (51) was the first to get out in the morning session and then followed by Ben Stokes (18), Adil Rashid (2), James Anderson (2).

Indian star spinner Ravichandran Ashwin dismantled England, and picked up 6/55 in the second innings to take 12 wickets in the match.

India in its first innings, reached 631 runs with the double ton of the Indian team Captain Virat Kohli, Murali Vijay’s 136 and Jayant Yadav’s 104 runs which was a great inning as an Indian bowler.

India is leading the series with 3-0 in the five test match series, the first match between India and England was a tie and then India won the second and third and fourth match as well.