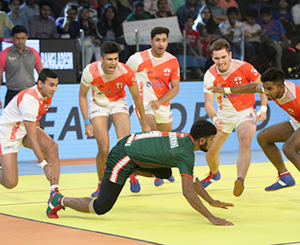 Riding on excellent performances by their raiders, Bangladesh notched a comfortable 52-18 win over England in the second match of Group A of the 2016 Kabaddi World Cup. Captain Aruduzzaman Munshi led the scoring charts with eight points as Bangladesh raiders scored 34 points. England's defence had a night to forget as they not only failed to score too many points but also allowed easy bonus points to Bangladesh on numerous occasions.

Bangladesh were first out of the blocks and led 2-0 after two minutes. England's Keshav Gupta scored his team's first point in the third minute. Bangladesh scored three bonus points in four minutes to lead 4-1. The English defence scored their first point in the fifth minute as they trailed 2-6. Bangladesh skipper Aruduzzaman Munshi scored his third point in the sixth minute with Bangladesh scoring bonus points at will. Englad captain Someshwar Kalia opened his account with a raid in the eighth minute as England trailed 3-7. England were struggling to come to the grips with the game as they scored just four points in the first 10 minutes. Both teams' defence struggled as they scored just one defensive point in 10 minutes.

England were staring at an all out as they were reduced to just two men but they forced a super tackle in 13th minute with Someshwar Kalia putting in a critical challenge. Bangladesh, however, inflicted an all out in the 15th minute to lead 17-6. Bangladesh were cruising for most of the first half as they opened a 12-point gap in the 17th minute. Keshav Gupta scored his second point of the match in 18th minute as England trailed 9-20. Aruduzzaman Munshi was the most prolific of Bangladesh raiders and scored with five of his six raids in the first half. Zakir Hossain scored with a super raid in the 20th minute as Bangladesh led 23-9 at the end of the first half.

The second half began evenly as both teams traded raid points with Bangladesh leading 24-10 after 23 minutes. England's defence made a silly error in 25th minute as Bangladesh duly inflicted an all out to lead 31-11 after 26 minutes. The English defence scored their fourth defence point of the evening in 29th minute as they trailed 13-33.

Bangladesh raiders scored with ease as they opened a 25-point gap in the 33rd minute and England were reduced to just one man. Bangladesh led 42-13 as they inflicted another all out in the 34th minute. Tope Adewalure restored some pride for England with a super raid in 36th minute as Bangladesh led 44-16. Bangladesh showed their strong deep roots in Kabaddi as they were relentless throughout the match and won 52-18.

Bangladesh next play hosts India in a crucial tie on Tuesday whereas England will look to reverse their fortunes when they take on Australia on Monday.