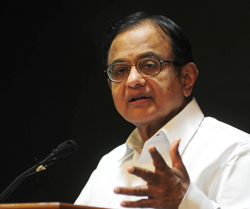 Just a day after the question raised by the former finance minister Yashvant Sinha, Finance Minister P. Chidambaram Monday said the Indian economy is more stable than it was 20 months back and the government is hopeful of meeting major macro-economic targets, including fiscal and current account deficits.

Chidambaram said, "The economy today is far more stable and far stronger than it was 20 months ago."Nobody is talking about downgrades today," he stressed.

He said the country's current account deficit is estimated to come down to $35 billion in the 2013-14 financial year from a record high of $88 billion in the previous year.

On fiscal deficit, he said it would be around 4.6 percent of the country's gross domestic product (GDP), as outlined by him in the union budget for 2013-14.

On the surge in the stock markets, Chidambaram said it is because of the UPA government's policy and should not be seen as a rally for the Bharatiya Janata Party (BJP) possible victory in the general election.