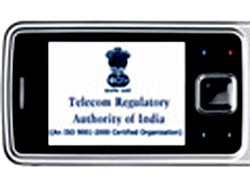 The Telecom Regulatory Authority of India (TRAI) - the telecom regulator - Monday has suggested to government to reduce the floor price for the next mobile spectrum auction, which can take place by this year-end, to make it tune with the market realities.

The telecom regulator in its proposal advised that the reserve prices for 1,800 MHz spectrum for Delhi should be Rs.175 crore per megahertz (MHz), for Mumbai Rs.165 crore per MHz, and for Kolkata Rs.59 crore per MHz.

For pan-India, the reserve price would be Rs.1,496 crore per MHz.

It also recommended that the reserve prices for 900 MHz spectrum for Delhi should be Rs.288 crore per MHz, for Mumbai Rs.262 crore per MHz and for Kolkata Rs.100 crore per MHz.

"Not only will the government get its revenue but the market will also be able to purchase spectrum at reasonable prices so that the long-term impact on the market and on the telecom sector is positive," he said.

TRAI said all spectrum allocated through auction should henceforth be charged at a flat rate.

TRAI chairman Rahul Khullar, when asked if the reserve price was too high last time, said: "Yes...please understand the approach has completely changed from the previous pricing regime."

TRAI also said there should be no reservation of spectrum for the renewal licensees in 900 or 1,800 MHz bands. And no priority should be accorded to these licensees in the bidding process and all bidders should be treated alike, it added.

Talking about the new recommendations, Mahesh Uppal, director, telecom consultancy firm Com First, said: "I see lot more takers and much better participation from existing telecom players in the next auction. The floor prices have been chopped significantly for various circles for different megahertz."

The regulator said the DoT (Department of Telecom) should come out with a clear roadmap before the upcoming auction, indicating the quantum of spectrum which will be available in future along with time-lines so that licensees whose licences are due for renewal in 2015-16 can take an informed decision about bidding for spectrum in the 1,800 MHz band.

The regulator said spectrum usage charge (SUC) for all auctioned spectrum should be at a flat rate of 3 percent of adjusted gross revenue of wireless services. This will come into effect from 1st April, 2014.

TRAI said the eligibility conditions prescribed in the previous auctions should be retained for the upcoming auction.

The industry stake-holders are happy about the recommendations, as Rajen Mathews, director general, Cellular Operators Association of India representing the GSM operators,told IANS: "We are pleased with overall direction on 1,800 MHz. The direction of flat spectrum usage charges is also helpful for the industry."

Similarly, Ashok Sood, secretary general, Association of Unified Telecom Service Providers of India, said: "We expect the next auction to take place by this calendar year."

The DoT will now go through the recommendations. They will be further reviewed by the Telecom Commission and finally to the Empowered Group of Ministers (EGoM) headed by P. Chidambaram.