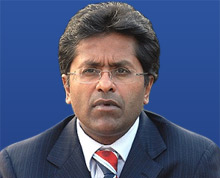 You may have admiration for the IPL opening ceremony but there is a man who is not impressed with this glamorous extravaganza. The man is none other than Former Indian Premier League (IPL) chairman Lalit Modi.

Modi, who is in London, took to micro-blogging site Twitter to express him, "Can't bear to watch it anymore - as on Tv it looks appalling. Was really looking forward to seeing something well presented. I am sure the Ratings will show."

Modi said that the opening ceremony should have been organized in a proper stadium for better rather than having it at the YMCA Ground.

"I would have preferred Opening Ceremony to be in A Stadium atmosphere, before a game. Rather than like a Concert like opening. The truth is I am in complete Shock - that a show like this can be staged. What was the Bcci thinking when they decided on this format," he tweeted.

Modi was one of the key personalities to make IPL a reality and was in charge of it in 2008, 2009 and 2010 before being suspended by the BCCI on charges of financial irregularities.