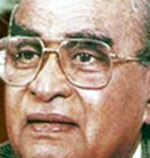 Former central minister, freedom fighter and ex-president of BCCI who brought the first World Cup in 1983, passed away on early Sunday at a hospital in New Delhi due to age-related problems, family sources said.

Salve was minister in the Indira Gandhi and Rajiv Gandhi Cabinet and headed the cricket board when India first lifted the world cup in 1983. He was the president of Board of Control for Cricket in India in 1982-85. A challenger series was named following his name that is being played in domestic cricket known as NKP Salve Challenger Trophy.

His body has been taken away to Nagpur on Sunday night for funeral, which will be performed on Monday. Salve was widower and he left a son Harish Salve, former solicitor general of India and a daughter Arundhati behind him.

The 91-year old Congress veteran leader was born in Chhinwada in Madhya Pradesh on March 18, 1921. He was the heart of Indian Cricket who served it for a long time.

Prime Minister Manmohan Singh on Sunday has expressed his condolence on the death of Salve stating that the country had lost a senior and distinguished leader who left a lasting imprint in different areas of public life.

"In his demise the country has lost a senior and distinguished leader who left a lasting imprint in different areas of public life."

Various personalities from cricket worlds too has express grief and condoled on his demise.