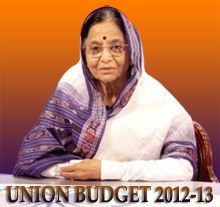 President Pratibha Patil outlined the highlights of Union Budget 2012-13 during her address in the Parliament's joint sitting today. Addressing the session, she mentioned the government's plan of action for the coming fiscal year and expressed government's commitment towards the development of the country in every field.

'Current year had been difficult for world economy but India has still managed to withstand an economic stability'. She said. The projected growth rate for the year is 8-9% and the agriculture growth rate is predicted to be 4% during the next five-year plan, She added.

During her speech she claimed that government would definitely act hard to bring back the black money to the country. "Government is working on various levels on black money and  will take necessary actions to bring them back and atop it further", she said. In addition, she also said that the government is also working very hard to reduce corruption at all levels in the country.

"National Mission for Delivery of Justice and Legal Reforms has already been set up to bring about a transformational change in fighting corruption and to enhance the transparency and accountability in governance." She said.

She also mentioned the various bills that have been introduced in the parliament including Public Interest Disclosure and Protection of Persons Making the Disclosure Bill, Prevention of Bribery of Foreign Public Officials and Officials of Public International Organisations Bill, Citizens' Right to Grievance Redress Bill, Judicial Standards and Accountability Bill and Lokpal and Lokayuktas Bill.

The President also said that Land Acquisition and Rehabilitation Bill would be introduced in Parliament.

Talking on health she said, "A separate department of disability affairs will focus on issues confronting disabled persons proposed to be set up. Polio has almost been removed from India. The district hospitals will be improved and 60 crores families are likely to get the benefit of health insurance." She added.

Regarding foreign relations she mentioned that we are committed to resolve all pending issues with Pakistan with formal talks. "We look forward to building upon the progress made so far mindful of the need for Pakistan to take necessary actions against terrorism and the related infrastructure on its soil," she said.

For China she said that it is very important to develop a Strategic and Cooperative Partnership with China. "The rapid growth of our trade and economic relations with China has significance not only for good relationship for both but for the global economy as a whole". She added.

Referring to the relations with Bangladesh she said "Protocol on the Land Boundary Agreement with it makes the way for settlement of long-running issues and a mutually-beneficial cooperation for both of us".

The President also supported the formation of National Intelligence Grid and the National Counter Terrorism Centre that are focused to enhance the capability of India to fight internal security threats of the country.

In addition to that, she announced the implementation of e-governance in various sectors such as education, health and post. She also mentioned that, the cities with population more than 20 lakhs would be facilitated with the metro facility.

The facility of e-filing will be incorporated for paying income tax returns.

Talking on rural development she said the farmers would get a benefit of 3% discount, if they pay their loans on time. Moreover, they will get all the aids and information from government to promote agriculture. In addition to that that she mentioned that special programmes will be run for reducing poverty and unemployment from the rural areas. Duding her speech she especially mentioned the success of MNREGA in bringing employment to the rural areas. She emphasized on development of banking services in rural areas and all the panchayats will be connected to Internet soon.