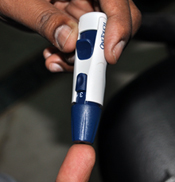 The governments, NGOs, health agencies, physicians and some responsive patients across the world Monday (November 14, 2011) expressed their concern over the worsening condition of Diabetes epidemic in the world.

Diabetes Mellitus commonly known as Diabetes is increasing in the worlds like epidemic disease and being one of the top diseases that causes most deaths. In developing countries, the conditions are worse, and about 80% of the diabetic patients die every year.

The World Health Organization (WHO), and International Diabetes Federation (IDF) have separately revealed the alarming reports in which it is said that if we cannot control the rising cases of diabetes mellitus very soon, it can become most economically destructive cause for any country.

According to latest study of IDF, 1 in 10 persons could develop diabetes in world by 2030. It is a high-alert report for everyone whether belonging to any country, race, sex, profession and age etc.

In order to face the epidemic condition, there is a need to create awareness amongst people, so that people can be cautious and acknowledge the hazards of diabetes mellitus. The awareness and knowledge about this disease and its complexity will lead the people to early go to the doctors and get diagnosed soon. The early diagnosis can prevent the people from the complexities of this disease.

Here, I am giving some brief details of diabetes mellitus in order to create awareness amongst readers.

Diabetes Mellitus is a set of metabolic diseases in which the body cannot regulate the amount of sugar level in the blood due to some reasons. The level of sugar especially glucose increases more than appropriate limit in blood that causes several complexities and triggers several diseases, even death.

There are three major types of Diabetes:

Type 1 Diabetes occurs when Pancreases (an organ of digestive system) becomes fail to produce insulin hormones. Insulin hormones allow glucose to move from the blood into liver, muscle, and fat cells, where it is used for fuel.

Glucose in the prime factor used for fuel and energy by the body cells. The burning of glucose produces energy for the cells that is used for functioning metabolic activities.

In the absence or scantiness of insulin, glucose cannot move into cells from blood, so it stays in the blood. This not only harms the cells that need the glucose for fuel, but also harms certain organs and tissues exposed to the high glucose levels.

The cases of Type 1 Diabetes occurs only 10% of the total cases of Diabetes. It happens due to destruction of pancreases caused by alcohol abusing, diseases, surgical removing of pancreases or failure of pancreatic beta cells that produces insulin.

Generally Type 1 Diabetes recognises in childhood or adolescent and is known as insulin dependent diabetes mellitus in which the patient has to take an injection of insulin hormones daily for sustaining the life till his/her whole life-term.

Type-2 diabetes is usually controlled with diet, weight loss, exercise, and oral medications. People with type-2 diabetes needs to take insulin at some point in the course of their illness to cope the higher level of glucose in blood.

Gestational diabetes a type of diabetes that produces in the second half of pregnancy period and it happens in mostly those pregnant women, who have never had diabetes before, but have a high blood glucose level during pregnancy. It goes away after delivery of the baby. But the women who have gestational diabetes are more prone to develop type-2 Diabetes Mellitus in later her life.

Other forms of Diabetes:

The other forms of diabetes are: congenital diabetes, which is due to genetic defects of insulin secretion, cystic fibrosis-related diabetes, steroid diabetes induced by high doses of glucocorticoids, and several forms of monogenic diabetes.

Diabetes without improper treatments can cause several acute and chronic complications. The acute complications include thirst, fatigue, frequent urination, acute kidney failure, and very high or very low level of glucose in blood that can lead to faint patients.

With the invention of insulin hormones, diabetes mellitus is curable. But if the patients do carelessness, it can cause several damages into the body that can cause death. The diabetes in advance level is not curable in allopathic medicine system; however, alternative medicine systems claim to cure diabetes even in its very advance stage.