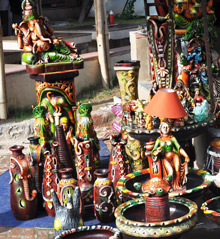 To the thriving Indian tourism industry, the recent Best Destination Awards at the 18th World Travel Awards in London just came as icing on the cake. Yes, India won the prestigious ‘Best Destination’ and ‘Best Marketing Campaign’ on 8th November, 2011.

India, which is going to hold its first Global Travel Mart on 12th December 2012, is also planning to come with more tourism friendly programmes to increase the number of tourists.

Being the largest service industry, Tourism in India contributes 6.23 percent to the overall national GDP. Presently, the tourism industry is experiencing a strong period of growth and the recognition comes as boost to that.

Union Tourism Minister, Shri Subodh Kant Sahai while receiving these awards has also announced plans to double tourist numbers by 2016. He said these awards will boost the Government of India’s efforts to brand India as a global tourist destination.

He said Tourism in India is already on the rise with the country seeing the number of visitors increasing by 10% between January and October this year alone. But the country has much grander plans and hopes to ensure that 1% of all global tourists are in India by the end of 2016.

While discussing on the plans of the Ministry of Tourism, the Minister was of the opinion that country will require an additional 400,000 hotel rooms to meet the demand which it proposes to do through a range of Public Private Partnerships offering massive opportunities to would be partners.

As the ministry hopes to create an additional 25 million jobs in the country - focusing on developing human resources, travel and hospitality and education, it is to note that the industry at present contributes 8.78 percent of the total employment in India.

Speaking at the award presentation ceremony, Mr. Graham Cooke, Chairman, World Travel Awards, said, “Currently India lies as one of the most favoured destinations for tourists from around the world. But with investment over the next two years it hopes to drive to 'year-round' tourism, including eco, wildlife, health and cruising will seem them break into the top 10 for the first time, surpassing the likes of Australia, Switzerland and South Africa in the process”.