New Cabinet takes oath in Gujarat, amid dissent within the BJP 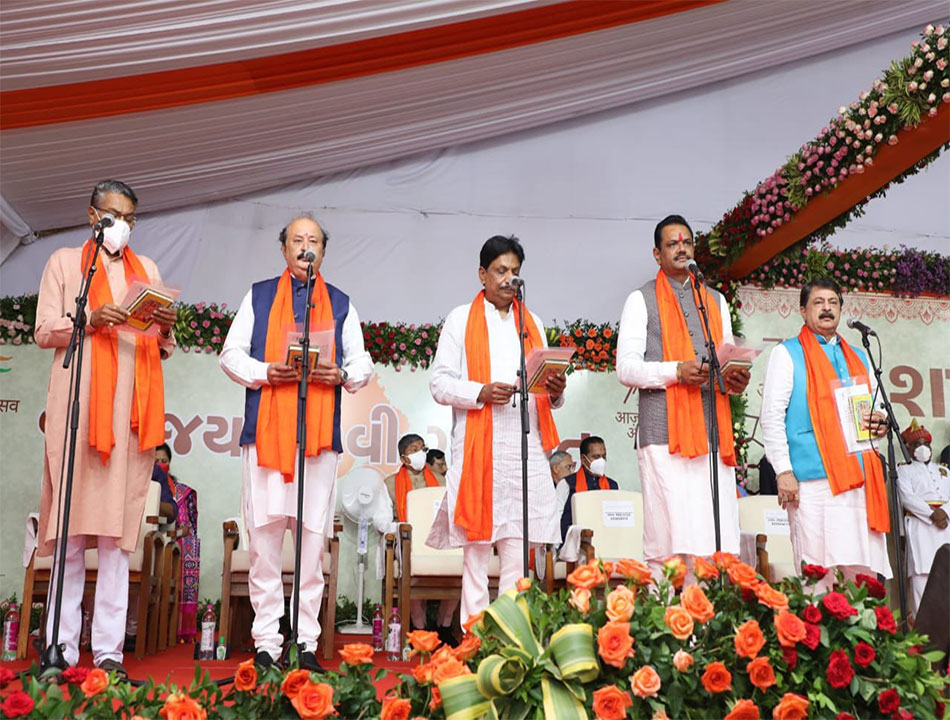 The new Gujarat assembly cabinet took the oath, on Thursday, administered by the governor of Gujarat Acharya Devvrat, and in the presence of the newly appointed CM Bhupender Patel and his predecessor Vijay Rupani.

24 cabinet ministers have been selected by CM Patel to hold office under his term of being Chief Minister of the state of Gujarat. The Cabinet saw many new faces, even after strong dissent amongst those who were previously in charge. Many old faces like the last CM Vijay Rupani were dropped from being part of CM Patels new Cabinet for Gujarat.

Harish Sanghvi, Jagdish Panchal, Brijesh Merja, Jitu Choudhary, Manisha Vakil were sworn in as Ministers of State with independent charge. Assembly’s speaker, Rajendra Trivedi, who gave his resignation today, was also present at the ceremony and took oath as a minister.

The Oath ceremony which was to be held on Wednesday got deferred last-minute after elaborate arrangements had already been made. It can be speculated that the difference in opinions amongst the party leaders, over the selection of the new council, might have been a reason for the delay.

The BJP expected a smooth transition of the CMs office after CM Vijay Rupani handed in his resignation after the party was not happy with him, without any protest. However, the transition doesn’t seem to be one of the smoothers of operation for the BJP.

Old party leaders who had held positions in the government were not comfortable giving in, not being selected to be in the Cabinet. Among the several senior ministers who were fighting for their post, Deputy Chief Minister in the last cabinet, Nitin Patel was part of the group too. Nitin Patel initially was considered to be the new CM but many party’s members were surprised by the shocking appointment of Bhupendra Patel.

However, the chance of serious revolt in the BJP cadre seems to be less, since reports suggest, party’s leader Amit Shah has been instrumental in the engineering of the change in Chief Minster. Amit Shah along with PM Modi have been part of this course correction, after reports of dwindling public support towards Vijay Rupani appeared, right before the next assembly elections, in 2022.

Home Minister Amit Shah had held a series of meetings after the swearing-in ceremony of Bhupendra Patel on Monday to sort out the issues over the council of ministers and the new cabinet.