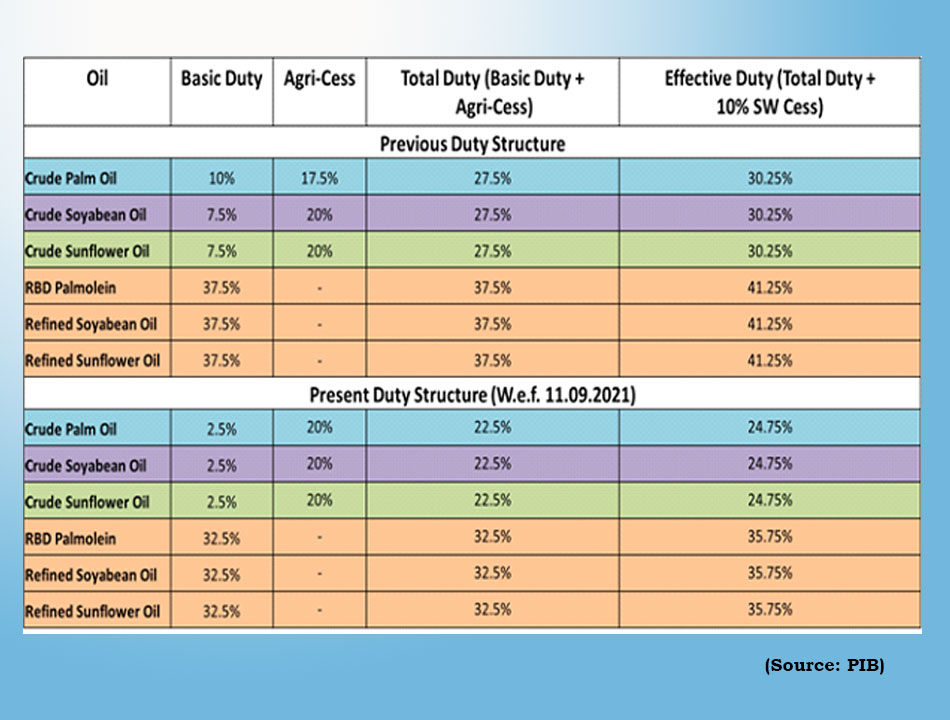 The Government of India to make edible oil available to the Indian consumer at a fair price made a policy decision to further reduce the standard duty of Crude Palm Oil, Crude Soybean oil, Refined Palm Oils, Refined Soyabean oil,  Refined Sunflower Oil and Crude Sunflower Oil , effective from the 11th of September 2021.

In the same notification, Agri-cess for Crude Palm Oil was also increased from 17.5% to 20%.

This phenomenon is however not just national, but a global phenomenon.

India’s demand for edible oil is way over what can be domestically produced. Around 14.5 million tonnes of edible oils are imported to the country to meet the demands. This dependency on imports, also makes India’s edible oil pricing very susceptible to the global edible oil price changes.

Out of all the edible oil imported into the country, Palm oil makes up a sizable chunk of the import, whose global price increases have also increased its prices in India. The palm oil price which in June 2020 was just Rs 86/kg has shot up to Rs 138/kg. Palm Oil which is majorly produced by Malaysia, has a labour shortage which has caused a shortage in the production of palm oil. Coupled with the pandemic and effects of climate change, it has further plummeted the production of Palm oil in Malaysia, which is responsible for over 44% of the world supply of Palm oil.

The Indian government had tried to take some action to tackle the price increase, and in a previous notification reduced the import duties on Crude Palm oil to 10% from 0.06.202, which has now been reduced to 2.5% . The government also amended its restrictions on Refined Palm Oil policy, changing the ‘restricted’ import to ‘free’.

In August the government reduced the standard rate of Duty on Crude Soybean Oil and Crude Sunflower Oil to 7.5% and Refined Soyabean Oil and Sunflower oil to 37.5%, as well, which has again been reduced further with the new notification on Friday.

According to previous and current notification, the standard duty structure on edible has changed.