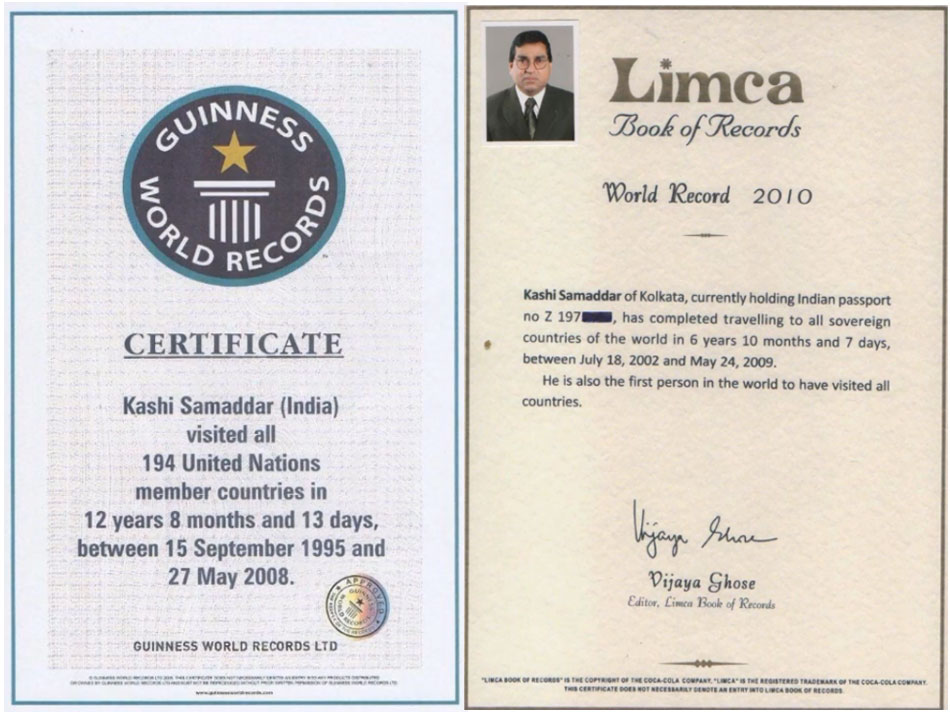 Kashi Samaddar has travelled every Country of the World braving Visa Difficulties and Life risks through wars and set his first World Record on 27th May 2008 at Kosovo as the “First person visited all 194 Countries of the World”. Thereafter on 10th Jan 2009 by visiting 218 Countries & Territories, he became the “Most visited person of the World” at Guam, an American Territory at Pacific. On 24th May 2009, he again entered Guinness Book as the “Fastest Person to visit all Sovereign Countries” at Victoria, Canada with 06 yrs 10 months and 07 days as the 03rd Record.

Due to prolonged conflicts, Sudan got divided into two and South Sudan became the 195th Country of the World on 09th July 2011 and on the same day, Kashi set World record as the “First person visited all 195 Countries of the World” for India again. This is the last Independent Country of the World and this prime Adventure World Record remains with India till now as on 2021 and will continue until a new Independent Country. It was extreme difficult as road from Uganda, Flights from Kenya & Banking were totally closed. Well done Kashi Samaddar for India.

Indians benefit from relaxed Visas due to him. Also, Indian Passport is the only Internationally recognized Identity of Indians including the Cricket Star, Film Stars and Bharat Ratnas. Kashi Samaddar is First person to carry it to every Country of the World risking Life and spending Huge without taking an easy Visa Nationality but he did not take any Donation to keep Indian Heads high. The rarest Success of Identity of Indians is pride of 140 Cr Indians & must be put at School Curriculum without delay so that every Indian is aware and gets inspired for better.

How powerful are his 09 World Records for India? For ref, at past 04 International Olympic Games from 2008- 2021, China got 153 Gold Medals compared to 02 by India but China could not get a single Record as him- so these are the most powerful Achievements by any Indian.

Adventure is under the Ministry of Sports, Government of India and he expects that the Sports Ministry, Businessmen, Corporate and Indian States to honour him with Cash Grants and Rewards, for rarest Achievement on the IDENTITY OF INDIANS to every Country of the World.