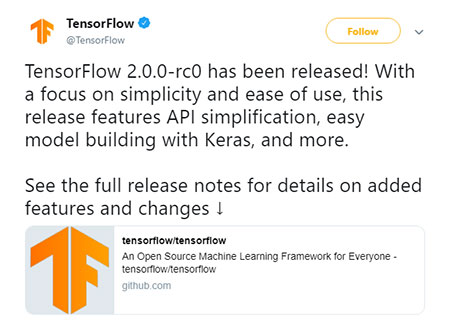 Google announces this pre-release by posting a message on its official Twitter account. Post says "TensorFlow 2.0.0-rc0 has been released! With a focus on simplicity and ease of use, this release features API simplification, easy model building with Keras, and more. See the full release notes for details on added features and changes"

* TensorFlow 2.0.0-rc0 comes with the easy modeling with Keras and eager execution support.

* This update of TensorFlow comes with the support for Strong model deployment in production on any platform.

* This version is further simplifying the TensorFlow API by reducing duplication. This update also removes the deprecated endpoints.

TensorFlow is an open source deep learning and mathematical computation framework created by Google. This framework is used to develop machine learning and deep learning models.  It provides a variety of classes, support for training and deploying large-scale neural networks on variety of computational hardware. Model developed in TensorFlow can be deployed on CPU, GPUs, TPU, mobile and Edge nodes. TensorFlow comes with the libraries for powerful analysis of data. TensorFlow was originally written by Google engineers. Google has actively worked to support and develop the community.