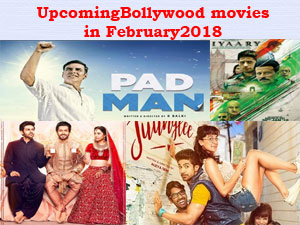 In the month of February many Bollywood movies are getting released in box office, here are details about these movies.  We are presenting the list of upcoming Bollywood movies in February2018, which are announced by their makers.

The Padman is among the major release this year.

MoiveAiyaary is directed by Neeraj Pandey and it’s a production of Reliance Entertainment. The Hindi film Aiyaary was announced in April 2017 and it was written by Neeraj Pandey. Neeraj Pandey is the director of this movie. The shooting for this movie was done in many places including Delhi, London, Kashmir.

The SonuKeTitu Ki Sweety is Hindi Film which directed by Luv Ranjan and its a production of T-Series. This is a drama movie which revolves around Titu (Sunny Singh) and Sweety (NushratBharucha). In this movie Titu is getting married with Sweety and Titu's friend Sonu (KartikAaryan) came in between.

This movie is casting Akshay Kumar in lead role and the movie is directed by R. Balki. This movie is being produced by Columbia Pictures.  This another awareness movie by Akshay Kumar for superstition related to sanity pads in India.

The Hindi Movie DilJuunglee is directed by Aleya Sen and produced by Pooja Entertainment. This movie is revolving around the story of Koroli. The person Koroli is sole child of a London based business tycoon. Koroli came to India and get settledhere in Delhi to fulfil her 'pursuit of happiness.'

The 3 Storeys is Hindi thriller movie directed by Arjun Mukherjee and produced by Excel Entertainment.

The Note PeChot at 8/11 is Comedy Hindi film directed by Imran Ahmed Khan. This movie is produced by Kreative Krishna Entertainment, Umra Ji Entertainment and going to hit box office on 16th February 2018.

The 'Welcome To New York' is Comedy Hindi movie directed by ChakriToleti and produced by Wiz Films. This movie is going to hit box offices on 23rd of this month.