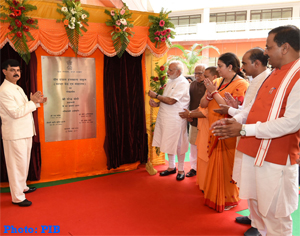 The Prime Minister, Narendra Modi, yesterday dedicated to the nation, the Deendayal Hastkala Sankul - a trade facilitation centre for handicrafts - at Varanasi. The Prime Minister had laid the foundation stone of this Centre in November 2014. Today, he visited the Centre, and was given an overview of the facilities developed there, before arriving on the dais for the dedication.

He described the Trade Facilitation Centre as one of the biggest projects for Varanasi for a long time. He said this Centre would help the artisans and weavers showcase their skills to the world, and facilitate a brighter future for them. He asked the people to encourage all tourists to visit this Centre. He said this would result in increased demand of handicrafts, and also boost the tourism potential of Varanasi, and indeed the economy of the city.

The Prime Minister said the solution to all problems is through development. He said the Government is focused on bringing about positive change in the lives of the poor and of succeeding generations. In this context, he praised the efforts of Utkarsh Bank.

Speaking on the occasion, the Union Textiles Minister Smt. Smriti Zubin Irani said that the Ministry of Textiles is fortunate that the Rs. 300 crore Deendayal Hastkala Sankul has been dedicated to the nation by the Prime Minister, on the auspicious occasion of Nav Durga. The Minister recalled that the foundation stone of the Sankul was laid by the PM on 7th November, 2014 and that the first phase was inaugurated by the PM on 22nd December, 2016. She said that the dedication of the Sankul today is a demonstration of the leadership of the Prime Minister. She said that it will help increase the earnings of weavers and artisans, and help better showcase their products to the world.

The Textiles Minister said that Government wants every member of the families of weavers and artisans to be able to fulfil their dream of acquiring good education. She informed that towards this, the Ministry of Textiles has entered into MoUs with Indira Gandhi National Open University (IGNOU) and National Institute of Open Schooling (NIOS), whereby children of weavers and artisans are able to avail school and university education, with 75% of fees being borne by the Government of India.

Speaking about the success of the MUDRA scheme, the Minister said that beneficiaries receive security-free loans ranging from 50,000 rupees to 10 lakh rupees under the scheme. She said that more than 33,000 weavers have benefited by MUDRA scheme, receiving loans worth more than 170 crore rupees. She added that weavers receiving MUDRA loans have been able to increase their income by more than 50% within just two months. The Minister said that the Government will reach out to artisans across the country, in order to provide them benefits of MUDRA loans and other facilities.

A Brief on Deendayal Hastkala Sankul

The Finance Minister in the Budget 2014-15 had announced setting up of a Trade Facilitation Centre and a Crafts Museum to develop and promote handlooms, handicrafts and silk products of Varanasi and to provide necessary help to weavers, artisans and entrepreneurs of Varanasi in strengthening their marketing activities in domestic as well as international markets and in carrying forward the rich tradition of handlooms at Varanasi.

A Trade Facilitation Centre is an indispensable step to help weavers/artisans of Varanasi to integrate into the global economy. There is a need for trade facilitation and advisory services to provide support for compliance with trade procedures, formalities and legal and regulatory requirements; this is needed to make entrepreneurs aware of new rules, regulations, thereby facilitating their import/export activities and enhancing their competitiveness. There is also a need to showcase the rich tradition of Varanasi through museum, live demonstration and audio visual medium to domestic and international tourists.

The Sankul will facilitate the weavers/artisans/exporters in promotion of handlooms/handicrafts in both domestic and international markets. The Crafts Museum in the Sankul will preserve the traditional handloom/handicrafts products of Varanasi and showcase the handloom & handicraft products, which will be an inspiration for the new generation, scholars, designers and tourists.

The project spans 7.93 acres, with a built-up area of 43,450 square metres. The approximate cost of the complex is 300 crore rupees.

The project is strategically located near the upcoming bypass between NH-29 (Varanasi - Gorakhpur Road) and NH-56 (Varanasi - Sultanpur Road) which shall reduce travel time to Sankul from Varanasi airport to 30 minutes and from Sarnath to Sankul to 20 minutes. The location of the site also allows its connectivity to all prominent locations within Varanasi and Sarnath. The location is expected to be the new growth corridor of development.

The project consists of five blocks: Marts-cum-Office, Convention hall-cum-Exhibition, Food court-cum-Guest House, Shopping Arcade and Crafts Museum. It has double-basement parking facilities with parking capacity of around 370 cars and 430 two-wheelers.