Newton, a cinematic experience to enthral the audience! 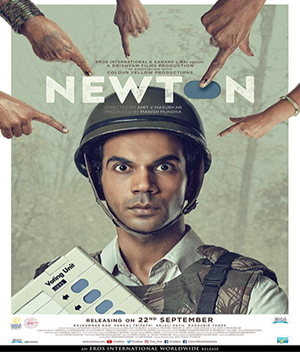 Known to belt out films powered by content in the most entertaining way possible Eros International and acclaimed filmmaker, Aanand L Rai have joined hands with Drishyam Films for a black comedy, Newton. About a rookie government clerk, assigned to conduct elections in conflict-ridden jungles of Chhattisgarh, despite the fear of Naxalite attacks, the film highlights the predicament of an idealistic youth against the world's pragmatism and cynicism. Moved by the difference in the Indian Constitution's preamble and the reality of our times, director, Amit V. Masurkar, envisioned the highly anticipated film and penned this comedy-drama's story.

Essaying the titular role, National Award-winner, Rajkummar Rao, currently high on the successes of Aligarh, Trapped and Bareilly Ki Barfi, will be dazzling the celluloid in a never-seen-before avatar.

Rajkummar says, “Shooting for Newton has been one of the most enlightening experiences in my career. I'm going to cherish it for life. I am proud and honoured to be part of this film.”

With other performance-oriented actors such as Pankaj Tripathi, Anjali Patil and Raghubir Yadav, the political satire has premiered in a number of international film festivals including, Berlinale 2017, Edinburgh International Film Festival and Tribeca Film Festival and received rave reviews.

Manish Mundra, the founder of Drishyam Films and the producer of Newton says "After travelling the world with Newton and winning acclaim all over, we are excited to finally bring it to our Indian audiences. As we celebrate 70 years of Independence this year, I hope people come out to see our film and the immense feat that is the Indian democracy."

Shot in the mining town of Dalli Rajhara on the outskirts of Maoists controlled forests; the movie is set to present an eye-opener to the viewers. To conserve the rawness of the film, tribals from the jungle settlements were auditioned and finalized by the casting director in a month's span.

Aanand L Rai says, “I was really taken by the maturity and dexterity with which Amit has handled such a sensitive film subject. The film uses comedy to bring out some of the deepest human emotions and thoughts that question our innate being and personalities. It talks about change and being a part of one in a thought provoking yet entertaining manner. Wrapped in humour this one will definitely leave the audience with a chuckle.”