Babumoshai Bandookbaaz rakes in Rs 7.53 crores in its opening weekend! 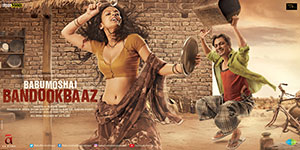 With rave reviews by critics and strong positive word of mouth, the movie witnessed an impressive growth over the weekend and has managed to get good number of footfalls on Saturday (Rs 2.41 crores) and Sunday (Rs 3.07 crores) thereby making the weekend total to Rs 7.53 crores India Biz. (Excluding Punjab, Chandigarh and Haryana).

Nawazuddin's ardent fan base has certainly translated to the box office prospects of the crime drama, with the critics raving about yet another powerhouse performance from the versatile actor.

Despite being in competition with other releases, Babumoshai Bandookbaaz has managed to make its presence felt at the box office despite its unique genre.