Government to address the problem of malnutrition among children 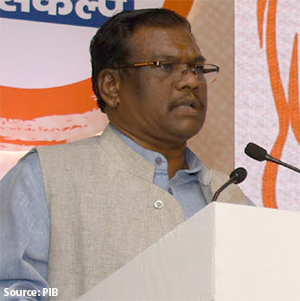 The steps taken by the Government to address the problem of malnutrition among children are as follows:

1. Promotion of appropriate infant and young child feeding practices that include early initiation of breastfeeding and exclusive breastfeeding till 6 months of age through ASHA worker and health care provider at health facilities. Ministry of Health and Family Welfare recently launched “MAA” programme to provide impetus on capacity building of the health workers on lactation management at both community and facility levels and 360 degree IEC campaign to create awareness regarding breastfeeding.

2. Management of malnutrition and common neonatal and childhood illnesses at community and facility level by training service providers in IMNCI (Integrated Management of Neonatal and Childhood Illnesses) training.

3. Treatment of sick children with severe acute malnutrition at special units called the Nutrition Rehabilitation Centres (NRCs), set up at public health facilities. Presently 965 such centres are functional in 26 States and UTs.

4. Vitamin A supplementation for children aged 6 months to 5 years.

5. Village Health and Nutrition Days and Mother and Child Protection Card are the joint initiative of the Ministries of Health & Family welfare and the Ministry of Woman and Child for addressing the nutrition concerns in children, pregnant women and lactating mothers. Monthly Village Health and Nutrition Days (VHND) are monthly days held at village level in Anganwadi centre to increase the awareness and bring about desired changes in the dietary practices including the promotion of breastfeeding.

6. 'National Iron Plus Initiative’ has been launched as an effective strategy for iron folic acid supplementation and treatment of anaemia in children, adolescents, pregnant and lactating women, in programme mode through life cycle approach.

The Minister of State (Health and Family Welfare), Sh Faggan Singh Kulaste stated this in a written reply in the Rajya Sabha here today.