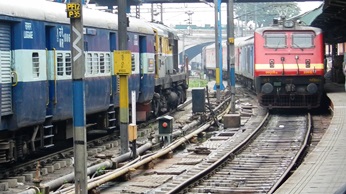 VIKALP Scheme is Presently Available for E Tickets Only

Speaking on the occasion,, Minister of Railways Suresh Prabhakar Prabhu said that World Water Day should not be celebrated only once in a year. There is no point celebrating only once rather steps should be taken daily to make this World Water Day more meaningful. In Railways, there is large area of land in its jurisdiction, by virtue of it, large number of water bodies lies in its jurisdiction. Railways has taken steps to restore water bodies in each zone of Indian Railways and revived them. One such 200 years old water body was restored in South Central Railways. In this water policy, water audits, restoration of water bodies and recycling of water will be ensured. Indian Railways Water Policy is not one day affair, it is our commitment for all time. Target has been set for plantation. 5 Crores saplings are to be planted in 3 years. 1.25 Crore saplings are targeted for this year. Environment Directorate has been set up in the Railway Board. A mission of Rs. 41000 Crore for saving in energy bill has been set. 1000 MW target of solar energy production has been set out of which 500 MW will be through Rooftops and 500 MW on land. Railways has been committed for environment. Railways is working with UNEP to achieve this. Science Express has been started for awareness about Climate Change and other Environmental issues.

He also said that Railways is being reformed, and there is a clear road map. Our efforts are targeted towards ensuring confirmed tickets for all, safety of the passengers, zero accidents, speed enhancement of trains and reach of Railways in far off regions in our country. Railways have sanctioned 12,500 Kms doubling, tripling. It is to be noted that 60% of the traffic is concentrated in 16% of Indian Railways network. To achieve the targets set for 2020, Railways have fastened the commissioning of doubling, tripling. To make the passenger experience better LHB Coaches have been introduced. Speed enhancement is Railways’ priority on trunk routes like Delhi- Mumbai, Delhi- Howrah. Under the VIKALP Scheme, passengers will be immensely benefited. It is a transparent scheme in which the passengers will be provided confirmed reservation in alternate trains without giving extra fare or any refund provided for the difference of fare. This will ease the problems of passengers.