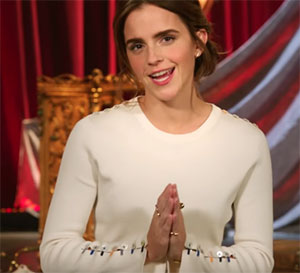 One of the most outspoken actresses and true feminist beacon of women’s rights everywhere is Emma Watson. Chic, cheeky, and wise beyond her years, the famous Harry Potter actress and UN Women Global Goodwill Ambassador with her Feminist role in Beauty and the Beast, she's proven herself to be an icon to a younger generation, India included.

Well we have news that the Beauty And The Beast actress has specially chosen to send warm Holi wishes to all her numerous fans in India via a special video! Yes that right, of all the countries Emma wanted to reach out to India and wish her fans on the eve of the colourful festival.

You've seen her cast a spell as the tenacious Hermione in the Harry Potter series. Now, Emma Watson is all set to break the spell as Belle in Disney's Beauty and the Beast.

As the world gears to witness the stunning, cinematic event celebrating one of the most beloved tales ever told on March 17, 2017, Emma Watson sends an EXTREMELY SPECIAL AND EXCLUSIVE VIDEO MESSAGE FOR HER INDIAN FANS ON THE OCCASION OF HOLI.

She has spoken the following in a video message for her fans, "Namaste India, wishing you a very Happy Holi! And don’t forget to see Beauty and the Beast this March in cinemas near you.”

Such is the craze for Emma that we are sure all the fans out here will be super thrilled to get such rare wishes from the International superstar!

Check out the video: Happy Holi - With Love from Emma Watson Beauty and the Beast In Cinemas March 17