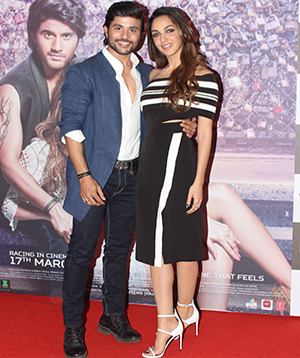 It was quite a starry affair at the trailer of 'Machine' which was held in the presence of the actors Kiara Advani, debut actor Mustafa, directors Abbas-Mustafa and Producers Jayantilal Gada and Haresh Patel.

The movie which sees the debut of Mustafa on the silver screen has created a lot of buzz with the announcement itself and everyone present there could not wait to see the trailer of the film.

Mustafa and Kiara Advani made a grand stylist entry in a sport car.

The trailer was played amidst whistles and claps cheering the Bollywood newbie Mustafa and his leading lady Kiara. Everyone who saw the trailer was left curious and excited about the film.