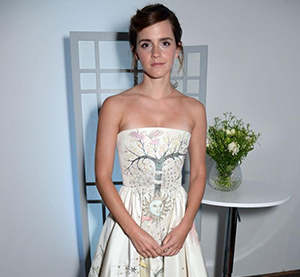 World famous youth icon and Beauty And The Beast actress Emma Watson was a vision in white Dior as she received recognition of her acting talents alongside her campaigning efforts for gender equality as UN Women Global Goodwill Ambassador, at the Elle Awards as WOMAN OF THE YEAR!

Looking stunning in Dior couture, custom made for Emma, taking to the stage, Emma said: 'This is not a year we will allow yourself to be silent. This is the year that women's voices are heard.'

Emma Watson has been recognized for her gender equality. She added: 'I'm not sure I deserve it really, but I'll take it. It's such an honor.'