Chris Hemsworth asked for THOR to be shot in Australia to be at home! 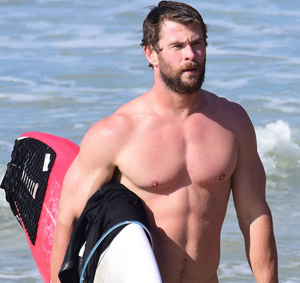 Superstar Chris Hemsworth who will reprise his superhero God in Thor Ragnarok, reveals that he had asked the makers to shoot in Australia and luckily they agreed!

Chris said, "I asked if we could shoot in Australia and thankfully the Marvel guys said they would look into it but couldn’t promise anything.   To me, to be home again for more than two weeks would be fantastic. And it worked out. It was so good.It was so nice being there. There’s just such a familiarity with the crew and everything here. And I get to sleep in my own bed. But I also t think there’s such wonderful talent here as well, in the cast and crew across the board. So it was fantastic. And the weather was brilliant. I don't think we got rained out at all. It’s just been one of the best shoots I’ve been part of."

When asked about the experience shooting in brisbane, Chris said, "Man, that was nuts. I’d never seen that many people excited for a film crew. There were more people there than any premiere I’ve been to, and more excitement and buzz than any premiere event I’ve been to. The people of Brisbane were thrilled and packed in the streets to catch a look.The city sort of stopped for those couple of days. It was such a positive buzz, and we were all trying to get out there and sign autographs in between takes as much as we could. That was pretty special. It was great"