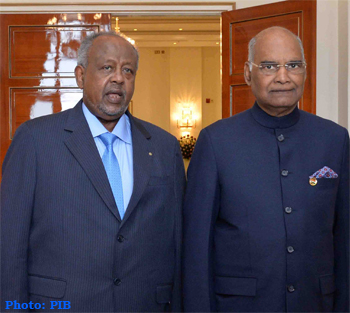 The President of India, Ram Nath Kovind, was accorded a ceremonial welcome at the Presidential Palace in Djibouti this morning (October 4, 2017), on the second day of his visit to the African country. He inspected a Guard of Honour along with the President of the Republic of Djibouti, Mr Ismail Omar Guelleh. The President also led delegation level talks with his counterpart. An agreement to establish regular political consultations between India and Djibouti, at the level of the Foreign Office, was signed in the presence of the two Presidents.

During wide-ranging talks with his Djiboutian counterpart, President Kovind - the first Indian President to visit Djibouti – made specific reference to areas of common concern and interest such as terrorism; renewable energy and particularly Djibouti’s support for membership of the International Solar Alliance; maritime cooperation in the Indian Ocean Region; and technical and capacity building assistance by India to enhance employment opportunities for Djibouti's young people.

President Kovind specifically thanked President Guelleh for Djibouti’s support during Operation Rahat, undertaken by India in 2015 to evacuate its citizens from conflict-hit Yemen.

Later in the day, the President attended a State Banquet Luncheon hosted by the President of the Republic of Djibouti. Thereafter, President Kovind left for Addis Ababa, the Ethiopian capital, on the second leg of his two-country visit to Africa.

In Addis Ababa, Dr Mulatu Teshome, the President of the Federal Democratic Republic of Ethiopia, made a special gesture in being present at the Bole International Airport to receive President Kovind. Subsequently, the President was accorded a Guard of Honour and witnessed an Ethiopian cultural music performance.

President Kovind is the first Indian President to visit Ethiopia in 45 years and the third overall. President V.V. Giri (1972) and President S. Radhakrishnan (1965) had previously travelled to Ethiopia.

The President will conclude the day by addressing an Indian community reception in Addis Ababa. His visit to Ethiopia continues Today (October 5).