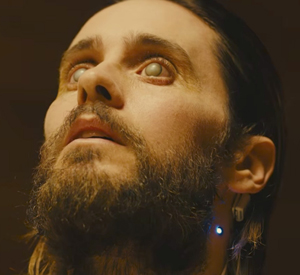 Jared Leto plays Neander Wallace, a blind and corrupt replicant manufacturer in Blade Runner 2049, another rich character to follow up his appearance as the Joker in Suicide Squad and HIV-positive Trans woman Rayon in Dallas Buyers Club.

To get into the skin of the character as his vision-impaired villain, Leto decided to once again turn to method acting and spent the entire shoot trying to live without the benefit of sight. Leto opted to wear specially designed contact lenses that made his eyes look opaque while simultaneously prohibiting visibility. It also required the Oscar winner to be guided around the set.

Director Denis Villeneuve said in a recent interview, “I am always moved by the way actors bring their characters to life. They're all different. They all have different techniques and Jared used to immerse himself into the character and make sure that every little detail is as close as possible to the character”

Just like our Bollywood superstar Aamir Khan, who gets into each and every detail of his character and studies his role in depth, Jared also concentrated on studying some of his friends who were blind, study their behavior and their gestures thoroughly. He would notice how they have a different way of moving and brought that on set in a very poetic and beautiful way

Fans will get a chance to see if Leto's extra level of dedication is equal to Aamir's dedication when Blade Runner 2049 hits theaters on Oct. 6.

'Blade Runner 2049' is all set to release in India on 6th October, 2017. It's a Sony Pictures Entertainment India release.