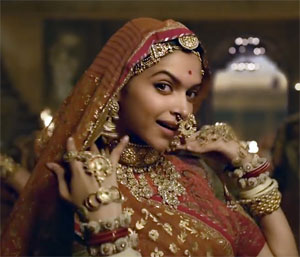 Mumbai:Deepika Padukone takes up the most challenging dance form to date with Ghoomar from Padmavati. Director Sanjay LeelaBhansalihas left no stone unturned in making Ghoomar the most riveting song sequence ever shot.

Deepika learned the dance form under the tutelage of renowned Ghoomar expert Jyothi D Tommaar, assistant director of the only authentic Ghoomar academy. The song is choreographed by Kruti Mahesh Midya and sung in the soulful voice of Shreya Ghoshal, with music by the maestro Sanjay LeelaBhansali.

A traditional dance form of Rajput women, the routine involves twirling in circles, leaving the onlookers enchanted and mesmerized by the beautiful dance performance. An extremely difficult performance art that takes years to learn, Deepika had to pick up the steps within a matter of days. With myriad of gracefulness and a royal poise, the song was shot keeping true to the traditional Rajputana folk dance form.
Sources reveal that Deepika did over 66 twirls while shooting for the song. Adding to the difficult dance form that includes twists and twirls, Deepika had to do the dance in an extravagant costume and adorned in heavy jewelry, which is a feat in itself.

Commenting on Ghoomar, Deepika said, “The Ghoomar Song has been one of the most difficult song sequences that Sanjay Sir and I have shot for. His vision can be seen in the grandiose of the set and the immense hard work we've all put into making it. I had started preparing for this film and character for several months before we actually started filming. But it was for The Ghoomar Song that I walked onto set as ‘Padmavati' for the very first time. The shooting of Padmavati began with The Ghoomar Song and I will never forget that day. I remember approaching my mark for the first shot and suddenly I felt a chill run through my body. It was almost as if Padmavati‘s soul had entered my body. That feeling still lingers and will continue for years to come”.

Starring Ranveer Singh, DeepikaPadukone and Shahid Kapoor, Viacom18 Motion Pictures and Sanjay LeelaBhansali's ‘Padmavati' is all set for a worldwide release on the 1st December 2017.