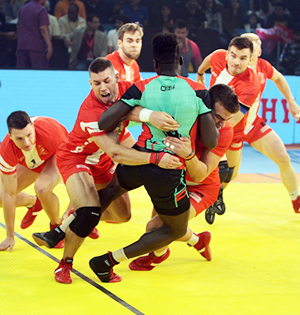 In the most exciting match of the tournament so far, Kenya beat Poland 54-48. In a highly intensive encounter, both teams showed their attacking prowess but it was David Mosambayi, the Kenyan skipper who was the difference between the two sides. Mosambayi scored 21 points and produced an excellent all-round performance to lead his team to victory. Polish skipper Michal Spiczko scored 11 points and Piotr Pomulak got 13 points but Polish defence let them down as they scored just five tackle points.

Kenya raced into a 3-1 lead in two minutes as their defence and attack began positively. The Polish got their first tackle point in third minute and Piotr Pamulak and doubled their joy as came up with a super raid to give his team 5-3 lead. Poland continued their hot streak and inflicted an all out in the fourth minute to lead 9-4.

Kenya replied with a super raid of their own as David Mosambayi scored three points as they trailed 7-9. In a pulsating encounter, Poland responded with another super raid to lead 14-7 in the seventh minute. Kenya forced a super tackle through Odhiambo Ogak to cut the lead to five points. Kenya came back strongly as they trailed 14-16 in the 10th minute and reduced Poland to three men.

Kenya leveled the game in 12th minute as Mosambayi scored his sixth point. Kenya inflicted an all out in 13th minute as Mosambayi scored two more points to give Kenya 20-18 lead. Poland captain Michal Spiczko scored two more points to tie the game at 22-22 in the 16th minute. Both captains led from front as Spiczko scored eight points whereas Mosambayi became the first man to achieve a super 10 in the 2016 Kabaddi World Cup. The first half ended with both teams trading points and it was all-square at 27-27.

The second half began as frantically as both teams exchanged tackle and raid points with Kenya leading 31-29 after 22 minutes. Pamulak continued his good raiding run and scored his seventh point in 23rd minute. Mosambayi, on the other hand, was in brilliant nick and scored his 13th raid point as Kenya led 34-31 in the 25th minute. Just when it looked like Kenya had started to take control of the match and extended their lead by four points, Poland came up with a super raid as they trailed 35-36. Mosambayi came up with a great tackle in 29th minute as Kenya led 40-35.

It was the David Mosambayi show as he continued to pile raid points and scored his 19th point with Kenya leading 43-37 after 30 minutes. Jakub Kloskowski scored two points in the 34th minute as Poland trailed 41-45 but Ikigu replied with two points as Kenya raced into a 48-41 with less than five minutes to go on the clock. Kenya dashed all hopes of a Polish comeback as they inflicted the second all out in 37th minute to lead 52-43. There was still a twist in the tale as Poland quickly scored three points in one minute and trailed 47-52 in 39th minute. Kenya kept their cool in the last minute and held on to win 54-48.