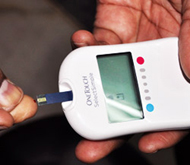 Currently in India 60 million are suffering from the diabetes and there is no cure of the disease. Exercise, weight loss and maintaining healthy BMI can prevent or even cure Diabetes.

New research published in "The New England Journal of Medicine" says "This study provides evidence that type 2 diabetes can be prevented by changes in the lifestyles of both women and men at high risk for the disease. The overall incidence of diabetes was reduced by 58 percent."

Thus it is now proved that the Yoga, Exercise and healthy lifestyle can reduce or even cure the Diabetes in Human beings.

Philip A. Ades cited the evidence to claim that type 2 diabetes can be prevented very effectively in high-risk people though lifestyle program of physical exercise and weight loss