Shoulders of youth should bear ploughs (hul), not gun: PM 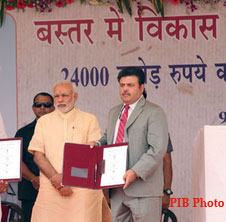 The Prime Minister, Shri Narendra Modi, today made an emotional appeal to left-wing extremists to shun the path of violence and join the mainstream of development. Addressing a large public gathering at Dantewada, the Prime Minister urged all misguided youth to leave their weapons, and spend a few days with children who have lost their parents due to incidents of left-wing extremism. He said those children would certainly inspire misguided youth to lay down arms forever. He said shoulders of youth should now bear ploughs, rather than guns.

The Prime Minister spoke of his extensive interaction with children of Dantewada, earlier in the day, and said that these children had both the dreams and the confidence to achieve them. He said these children, and the state of Chhattisgarh needed an atmosphere of peace, for these dreams to be realized.

The Prime Minister recalled that Punjab had successfully overcome violence, and expressed confidence that Chhattisgarh too would be able to overcome left-wing extremism. He said Chhattisgarh had the potential to emerge as one of the most developed states in India. He added that the investment of Rs. 24,000 crore that would flow into the region, as a result of the MoUs signed today in the Railways and steel sectors, will bring about a big change in the lives of people.

The Prime Minister said that employment for youth was the first and foremost requirement of all parts of India, and his Government was working to achieve that goal. He said India had successfully left behind its past of corruption and slow pace of development. He said the whole world had now recognized India to be one of the fastest growing economies.

The Prime Minister, who had visited the Livelihood College before arriving for the public meeting, appreciated the initiatives for skill development being taken by the Government of Chhattisgarh.