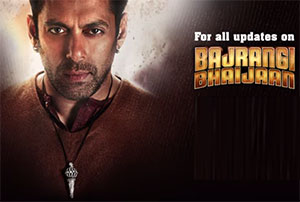 Mumbai, May 29, 2015: It's been an exciting few days for 'Bajrangi Bhaijaan' fans, and now the day we've all been waiting for is here, as the makers finally revealed the teaser of the movie. Keeping up with his fans' excitement, Salman Khan just tweeted the teaser of his upcoming film 'Bajrangi Bhaijaan'. The film is one of the most-awaited releases of this year, and the buzz around its teaser launch was phenomenal.

The teaser of this film showcases a 5 year old girl from Pakistan who gets separated from her mother at an Indian railway station. Lost and hungry, she finds shelter at the home of Pavan, an ardent devotee of Hanuman.

'Bajrangi Bhaijaan' is the moving story of Pavan's quest to unite the child with her parents against all odds. Set against the backdrop of the colourful Chandni Chowk, the film travels from the heartland of Punjab, through the deserts of Rajasthan, over the snow-capped mountains of Kashmir and finally to Pakistan. 'Bajrangi Bhaijaan' tells the story of how Pavan, who will move heaven and earth to fulfil the promise he made to the girl from across the border.

Watch the Bajrangi Bhaijaan awaited teaser, tweeted by the man himself here: