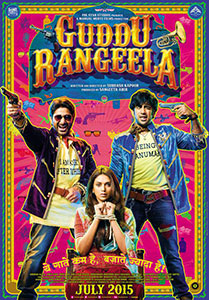 Mumbai, May 20, 2015: Aditi Rao Hydari, Arshad Warsi and Amit Sadh starrer, 'Guddu Rangeela' will hit theatres on July 3, 2015. The film revolves around two cousins, Guddu and Rangeela who kidnap a young girl named 'BABY', played by Aditi Rao Hydari and all the drama that unfolded.

The official trailer of the film highlighted the adventurous storyline and has been appreciated by the audience. Friends and fans of the actors and the film have expressed their admiration of the trailer and the performances on Twitter. Here is what they had to say: