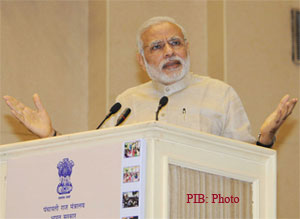 The Prime Minister, Shri Narendra Modi, today urged Panchayat members to work with a five-year vision with concrete development plans to bring about positive changes in their village.

In his remarks at a function in New Delhi to mark National Panchayati Raj Day, the Prime Minister hailed the contribution of women in the functioning of Panchayats across the country, and called for an end to the practice of "husbands of female Sarpanches" – "Sarpanch Pati" - exercising undue influence.

The Prime Minister urged Panchayat members to motivate all Government officials in their village to spend at least one hour a week with schoolchildren of the village.

The Prime Minister gave away the Annual Devolution Index (States) Awards, and E-Panchayat Awards, and congratulated the Zila Parishads and Gram Panchayats who were being felicitated on the occasion.

The Union Minister for Panchayati Raj, Chaudhary Birender Singh, and the MoS Panchayati Raj Shri Nihal Chand were present on the occasion.