Watch Big B in father role in the upcoming movie Piku 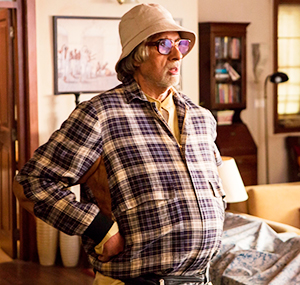 Mumbai, April 24, 2015: Just when you thought that the makers of Piku had dished out the best making of video ever-(on Deepika Padukone)-they have just come out with the yet another fun-gem and this one features Amitabh Bachchan!

Infact, for the first time ever, we have a behind the scenes video that reveals the unbelievably naughty side of Big B as he sings, dances, plays pranks and even bullies on the sets of Shoojit Sircar;s upcoming family comedy drama.

Going by the amount of excitement and camaraderie displayed by the stars on the sets of Piku, we can say without doubt that this film's shoot must have been one of the most memorable one for everyone involved! Needless to say, be it the posters or the making of videos, Piku's marketing campaign has turned out to be rich in content and imagination! We endorse it!

Watch Mr. Bachchan as he regales with song renditions, hilarious imitations, jokes and a whole lot of fun at: bit.ly/Piku-AB-60Days

Piku is a family comedy drama that revolves around a quirky father-daughter relationship essayed by Amitabh Bachchan and Deepika Padukone with Irrfan Khan top lining the cast, in a pivotal author backed role. 'Piku' also marks coming together of Shoojit Sircar, Ronnie Lahiri and Juhi Chaturvedi, the team behind Vicky Donor. Produced by MSM Motion Pictures (a division of Sony Entertainment Network), in association with Saraswati Entertainment Creations Limited and Rising Sun Films, and distributed worldwide by Yash Raj Films, 'Piku' will release worldwide on May 08, 2015.

Watch Mr. Bachchan as he regales with song renditions, hilarious imitations, jokes and a whole lot of fu 60 shots of Piku