What Big B in upcoming movie 'Piku' 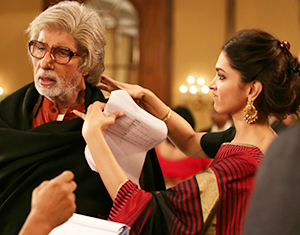 Mumbai, April 21, 2015: Shoojit Sircar's 'Piku' , a roller coaster ride of a crazy father-daughter relationship essayed by Amitabh Bachchan and Deepika Padukone turned out to be more fun than expected , courtesy the warm equation the two actors shared on the sets.

While Deepika has often said that she considers Mr.Bachchan a father figure in real life, Mr.Bachchan too has mentioned that Deepika reminds him a lot of his real daughter Shweta. The warm equation the two shared off-screen , reflected beautifully in their on-screen chemistry.

The picture too shows yet another shade of their father-daughter equation.

For a certain scene in the film, Mr.Bachchan being the perfectionist that he is,kept asking a lot of questions to director Shoojit Sircar. Infact  every time Deepika attempted to rehearse her lines with Bachchan , he enjoyed pulling her leg and went back to Shoojit with his queries.

Says Shoojit Sircar, “Mr Bachchan succeeded in pulling Deepika's leg. Every time Deepika was going to say her lines, he would interrupt her and ask me questions about the scene. This happened a few times till Deepika realized he was just having fun at her expense, and that's when we caught this animated reaction.”

'Piku' is a roller coaster ride of a crazy father-daughter relationship essayed by Amitabh Bachchan and Deepika Padukone with Irrfan Khan top lining the cast, in a pivotal author backed role. 'Piku' also marks coming together of Shoojit Sircar, Ronnie Lahiri and Juhi Chaturvedi, the team behind Vicky Donor. Produced by MSM Motion Pictures (a division of Sony Entertainment Network),Saraswati Entertainment and Rising Sun Films, distributed worldwide by YRF, 'Piku' will release worldwide on May 8, 2015.

Here is the trailer of the 'Piku' Movie: