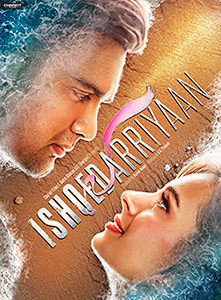 Mumbai, April 15, 2015: Mahaakshay Chakraborty and Evelyn Sharma Starrer Ishqedarriyaan Releases its First Motion Poster and movie is all set to release on May 15, 2015.

Film 'Ishqedarriyaan ' is Hindi Bollywood movie directed by V. K. Prakash and produced by Rajesh Banga. The stars of the movie are Mahaakshay Chakraborty, Evelyn Sharma and Mohit Dutta.

Director V. K. Prakash's upcoming film Ishqedarriyaan that has Mimoh Chakraborty and Evelyn Sharma in the lead roles has released its first motion poster. It features the two young actors intensely looking at each other with the backdrop of a beach, that blends perfectly with the two people in love. Mahaakshay Chakraborty and Evelyn Sharma will be seen together for the first time ever in this romantic film, playing characters they have never done before.