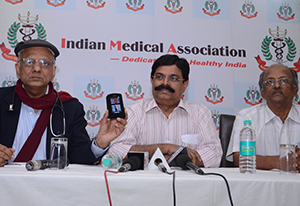 Over 1000 IMA leaders will deliberate and discuss achievements of 2015, plan for 2016 and address the key healthcare issues being faced by the Indian population

New Delhi: The Indian Medical Association is organizing its annual Central Council Meet on Sunday & Monday 27th-28th December 2015 at Hotel Le Meridian, New Delhi. Over 1000, Central Council members of the IMA from across the country will attend the meeting. The agenda being to deliberate and discuss various issues impacting the overall healthcare delivery system of India. Major achievements of 2015 will be recognized, and the challenges addressed. The new President of the Indian Medical Association for the year 2016 will also take oath.

Honorable Health Minister of Delhi Shri J.P. Nadda will interact with the IMA leadership on Day 1 and share his views on the healthcare scenario of the country and the issues, which need to be addressed jointly by the government and associations like IMA. Shri Rajyawardhan Rathore - Minister of State for Information & Broadcasting, Dr. Jitendra Singh, Hon’ble Minister of State of Science & Technology and Dr. Mahesh Sharma, Minister of State for Culture, Tourism & Civil Aviation will address the meeting on Day 2.

Addressing the press conference today, Padma Shri Awardee, Dr. A Marthanda Pillai - National President, IMA and Padma Shri Awardee, Dr. K K Aggarwal - Hony. Secretary General, IMA, in a joint statement, said, “During the past one year, the Indian Medical Association has taken several notable steps to help make the medical profession more transparent, accountable and effective. A prominent win for the medical profession being the amendment of the NCERT books to remove lines detrimental to the nobility of the medical profession in India. In addition to this, the IMA also succeeded in convincing the government to form a first of its kind inter-ministerial meet involving five Ministries to look into the demands made by IMA to help reduce the incidence of violence against doctors in the country. These demands include the amendment of Clinical Establishment Act, PCPNDT Act, Capping of Compensation, issues against medical violence and the issue of Crosspathy practice by medical practitioners”.

During the year 2015, IMA also suggested amendments to the proposed ART-Bill under governmental debate. They released a self-code of conduct for medical establishments and digital and social code of conducts for doctors.

In line with our honorable Prime Minister Shri Narender Modi’s campaign, IMA also launched a Digital IMA campaign and upgraded its infrastructure to allow the National body to communicate with all its 2.5-lakh members digitally. A weekly live webcast and webinar are held every Thursday by the IMA to update and educate doctors from across the nation on important healthcare matters.

Some of the key projects undertaken by the IMA this year include those aimed at raising awareness about Vitamin-D deficiency, the importance of safe water and air, the need to switch from trivalent to bivalent vaccination for polio eradication amongst others.

IMA will also be intervening in the BSC community health case tabled at the Hon'ble High Court.