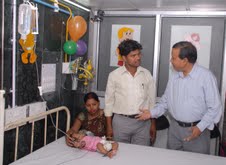 Inaugurating the emergency wing, Sh. Srivastava said that now a new Pediatric Medical Emergency Wing has been opened so that immediate attention can be provided to the seriously sick children. This Pediatric Emergency Block has five beds with nebulization and other latest facilities. D.D.U Hospital has a 50 bedded Pediatric Ward and till now, the emergent pediatric cases were being taken care of in the Pediatric Ward Block which is interiorly located in the Hospital.

Delhi Govt. has already started issuance of Birth and Death certificates at LNJP Hospital . This facility will also extended shortly in major hospitals which has more than 500 beds, like GTB Hospital, Deen Dayal Upadhyay Hospital and Bhim Rao Ambedkar Hospital.

The Chief Secretary also visited the OPD, emergency ward and Blood Bank center at the hospital and issues necessary instruction to improve the health care infrastructure in hospital. Chief Secretary said that doctors should be especially encouraged the people to become voluntary blood donors. We have to improve awareness and come forward to raising awareness about the importance of blood donation.