World thalassemia Day May 8: Situation alarming due to low awareness 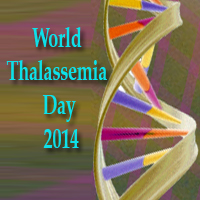 According to experts, in India, more than 10,000 children are born with thalassemia every year due to the sheer lack of awareness among couples, who are getting married. The facts are very alarming as it established the facts that situation is now very alarming.

This ignorance is also leading to a rise in the number of deaths among thallasemic patients, most of which is in the rural areas because of the low awareness, experts said.

"Awareness plays a major role in case of thalassemia. Owing to ignorance, patients often do not opt for such diagnosis and end up transferring faulty genes to their children," Choudhary said.

Thalassemia, a blood disorder, is caused by the weakening and destruction of blood cells. It is also caused by variant or missing genes, which severely affect the making of haemoglobin protein, an essential ingredient, which helps red blood cells carry oxygen.

Choudhary added that if either parent is thalassemic, then there are 25 percent chances that their progeny will have the disorder as well. "Such a child with thalassemia is called thalassemia major," he explained and added that such children require blood transfusion at regular intervals.

He further said, "Hence, in such cases, it is better to prevent the birth of such children. It is therefore essential that their parents opt for screening, even termination of the pregnancy if required."

Experts advise parents to get a Complete Blood Count test (CBC), NESTRO test and the Haemolobin Electrophoresis test done in case the doctor finds any abnormalities during their blood analysis.

"Though a bone marrow/stem cell transplant cures the disease permanently, there is a high deficiency of people in India who are willing to donate. They are skeptical that the donation would effect their health", Chaudhary shared.

According to a WHO report, more than 90 percent patients with thalassemia in Western countries lead a long and normal life. However, half of such patients in India die before reaching adulthood. Experts accept that it is the poor level of transfusions, medical therapies and HIV and hepatitis-infected blood, which are responsible for thalassemia-related mortality in India.

In developed nations, Gupta added, the patient awareness is high and people voluntarily opt for such screening tests.