Bariatric Surgery: It may reverse the liver damage in case obese patients 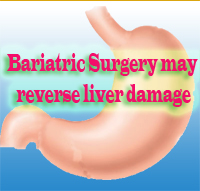 In a new study it is reveled that the weight-loss surgery is helpful in reversing the early stage of liver damage. After Bariatric Surgery it is found that the thickening and scarring of the liver tissue, early stage of liver fibrosis can be reversed and this is happening due to reduction in the fat deposits.

"Doctors should consider bariatric surgery as the treatment of choice for NAFLD in severely obese patients," said Michel Murr, a professor of surgery at University of South Florida-Tampa.

Researchers compared liver biopsies from 152 patients - one at the time of the bariatric procedure and a second an average of 29 months afterwards.

After reviewing post-operative biopsies, they found that bariatric surgery resulted in improvements for these patients.

In the post-operative biopsies, researchers found that fat deposits on the liver resolved in 70 percent of patients.

Murr noted that these findings on fibrosis reversal apply only to early-stage fibrosis and not late-stage liver disease.

"As a tool in fighting obesity, bariatric surgery could also help prevent the emergence of widespread liver disease," he added in the study that appeared in the journal Digestive Disease Week (DDW).

Studies shows that in long-term due to Bariatric surgery, patients gets the following results: