Trading community is the spine of Indian economy: Narendra Modi 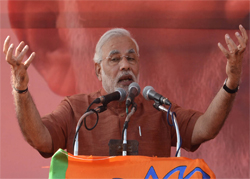 BJP Prime Ministerial Candidate Narendra Modi said that the traders of the Country are as brave as soldiers and it is the trading community which has brought laurels to our great motherland over the globe by displaying their exceptionally well business skills. He was inaugurating inaugurating a two days national convention of the Confederation of All India Traders (CAIT).

Modi said the entire mechanism of the Government needs to be revamped as it has been greatly rotten in last 65 years. He also called for a hassle free simplified taxation system for traders and opined that such a tax structure will promote voluntary compliance to a great extent, which will culminate into great generation of revenue for the government.

He further termed the trading community as the spine of Indian economy and strongly advocated a congenial atmosphere of business for traders. Making a strong pitch for up-gradation and modernization of retail trade of india, he called for enhancing the capabilities of the traders in order to meet global challenges.

CAIT National Secretary General Praveen Khandelwal while presenting a Traders National Charter to Modi and other leaders spelled out various burning issues of the trading community including Formulation of a National Trade Policy for Retail Trade and a separate Ministry of Internal Trade both at Centre & States.