Celebrities gathered for the noble cause 'Fashion against Aids' 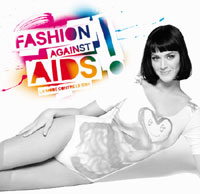 When it comes to doing good, sometimes the best thing celebrities have to offer is not money, but themselves. Charities cultivate relationships with stars for their ability to increase the public's awareness of their charitable endeavors and thus stimulate more donations. Many celebrities take time out of their busy schedules throughout the year to do charitable acts.

The Designers Against AIDS (DAA) a non-profit organization which has run many successful campaigns such as Fashion against Aids, seeking to mold public opinion and collaborated with several fashion houses, such as H and M, who will be soon launching retail outlets in India next year.

The Fashion against Aids campaign has been supported by global superstars such as Rihanna, Katy Perry, Akon, The Cardigans, The Scissor Sisters, Ziggy Marley, Yoko Ono to name a few. Playboy girl Shanti Dynamite is contributing towards the DAA foundation to draw attention and to increase young people's awareness of HIV/AIDS. She is also planning to create awareness on AIDS programs and sex education material in India.

Shanti Dynamite said, "It was a great honor to work with DAA on the Fashion Against Aids Campaign. I have always wanted to do something positive for the peoples, and I think bringing awareness will saves many lives. If I am able to save one person from being infected, I will be extremely pleased. I am glad that I can give back to society and through this campaign."