Not Capitalism, AAP is against the Crony Capitalism: Kejriwal 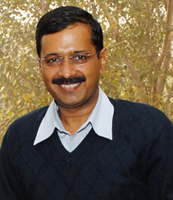 Former chief minister of Delhi Arvind Kejriwal has said that he is not against the capitalism; rather he is against the crony capitalism. He was addressing the Confederation of Indian Industry national council members here.

Justifying his steps and motive, Kejriwal said, “We might have made mistakes, our policies might be wrong, but our intentions are not corrupt.”

He said, Time has come to define what is the government's role. Government has no business to be in business, which is best left to private players.

He said whatever the form of government, it has three primary tasks - providing security, justice and a corruption-free administration.

“Unfortunately, no party speaks of these things, which are essential for doing business. It is the Aam Aadmi Party that has come for the first time speaking of providing security, giving justice and a corruption-free administration."

Saying that business people are creating wealth and employment for the nation, Kejriwal said a two-fold move was required to promote this.

"Existing procedures and rules need to be revisited and required to be changed and simplified. Secondly, policies have to be made on a proactive basis that encourage, rather than discourage business," he said.