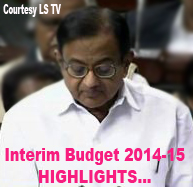 Ø No change in income tax rates

Ø One rank one pension demand accepted; to be implemented with

Ø Excise on small cars/two-wheelers lowered to 8 percent, on SUVs to 24 percent, on large cars to 20 percent

Ø Excise duty on mobile handsets to be restructured

Ø WPI inflation at 5.05 percent in January

Ø India's economy at 11th globally; aiming to be third

Ø To promote entrepreneurship among the Scheduled Castes and to provide concessional finance to them, IFCI to set-up venture capital fund of Rs.200 crore, which can be supplemented every year

Ø 100 million jobs to be created in a decade

Ø During 2013-14, 68,043 youth enrolled and 77,710 completed their training under National Skill Certification and Monetary Reward Scheme

Ø Steps to deepen Indian financial market: To liberalise the rupee-denominated corporate bond market; to deepen and strengthen the currency derivatives market to enable Indian companies to fully hedge against foreign currency risks; to create one record for all financial assets of every individual; to enable smoother clearing and settlement for international investors looking to invest in Indian bonds; Forward Contracts (Regulation) Act (FCRA) be amended to strengthen the regulatory framework of the commodity derivatives market.

Ø All taxes on exports to be waived for manufacturing sector

Ø PPP model to be increasingly viewed

Ø Community radio to be promoted with Rs.100 crore

Ø India not unaffected by events in global economy

Ø (With inputs from IANS)