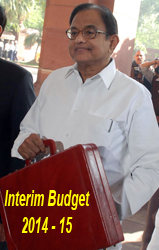 Despite the interruptions by some members in the Lok Sabha, Finance Minister P. Chidambaram presented the interim budget for 2014-15 in the Lok Sabha . Chidambaram during his budget speech, expressed his concern confronting the economy today and how his government has navigated so far to address the challenges.

He said the targets for fiscal deficit for 2013-14, as also farm credit and investments were met despite challenges, even as some key concerns such as current account deficit and food inflation were contained.

"No one is speaking about downgrades now,"said the finance minister, referring to the threats given by some global credit rating agencies to lower India's economic outlook that could have rendered junk status to Indian bonds and triggered a flight of capital.

"The economy is more stable today than it was two years ago," said the minister while presenting what was India's 83rd national budget and the 9th such personal exercise for Chidambaram.

The main budget for the financial year 2014-15 will be presented by the new government that will come to power after the general elections, the schedule for which is likely to be announced by the Election Commission soon.

Giving specific numbers, Chidambaram said fiscal deficit for 2013-14 was contained at 4.6 percent of GDP, against the target of 4.8 percent, and the current account deficit was lower at $45 billion, compared with $88 billion for the previous fiscal.

The finance minister also said the inflation has come down to 5.05 percent, against 7.3 percent when the budget was presented last year. Core inflation, which excludes items that see volatility in prices, was also down at 3 percent from 4.2 percent, he added.