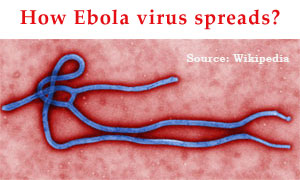 What we know about transmission of the Ebola virus among humans?

This article is based on the Ebola situation assessment by WHO.

Study shows that the Ebola virus can also spread indirectly, by contact with the contaminated surfaces and the objects. The risk of transmission from these surfaces is very low and it can be minimize further by cleaning and disinfecting the objects.

Not an airborne virus

The Ebola virus disease is not an airborne infection and can't spread through the air.

This mode of transmission has not been observed during extensive studies of the Ebola virus over several decades.

The spread of virus through coughing and sneezing is very rare. The pidemiological data emerging from the outbreak are not consistent with the pattern of spread seen with airborne viruses, like those that cause measles and chickenpox, or the airborne bacterium that causes tuberculosis.

Theoretically, wet and bigger droplets from a heavily infected individual, who has respiratory symptoms caused by other conditions or who vomits violently, could transmit the virus – over a short distance – to another nearby person. This could happen when virus-laden heavy droplets are directly propelled through coughing or sneezing and transmitted to a healthy person.

But according to the WHO study there is no document that supports such transmission method.

No evidence for mutation of this virus

Still there is no evidence of the mutation of Ebola virus. But there is speculation that the Ebola virus might mutate into a form that could easily become airborne.

To stop the Ebola outbreak, well-know protective and preventive measures needs to be implemented on a much large scale.