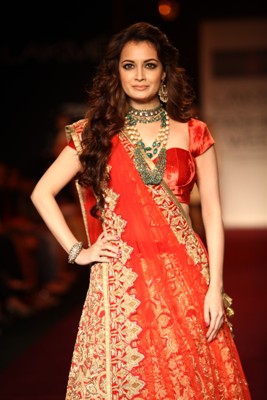 Bollywood actress Diya Mirza looked stunning covered in bridal ornaments wearing a red zardosi covered lehenga, tiny velvet choli and shimmering dupatta in the Lakhme Fashion Week 2013 in which she walked the ramp for designers Shyamal And Bhumika as showstopper.

It was time for the royal fashionable wedding season with all the glitz, glitter and drama, when Shyamal and Bhumika presented their collection "A Royal Procession" at Lakmé Fashion Week Winter/Festive 2013.

Lamps on the stage gradually lit up and created the Rajput/Mughal era of the show as the models emerged on to the ramp.

The designer duo's romance with the Big Fat Indian Wedding continued for their creations inspired by the splendour of Maharajas along with 16th century couture, which had a blend of Mughal and Rajput aesthetics. An intriguing mix of silhouettes, embroidery, regal touches, contemporary colours and styling was filled with eye-catching grandeur.

Fabrics had to be rich with raw silk, hand woven silk brocade, velvet, crepe, georgette and Matka silk, giving luxurious touches to the collection. When it came to colours, only the most opulent were used starting with flame scarlet, forest green, berry, earthy beige, sunflower gold, Moroccan blue, golden crème, aloe and black.

Detailing was in the form of fabric luntkans at the end of dupattas and backs of sexy cholis, while fragile nets over solid brocades and silks created a lovely texture. Waistcoats were teamed with ornate saris; velvet cholis gleamed with semi precious stones and flared lehengas swished over buckram petticoats. A mix of fabrics for saris, blouses, and kurtas had georgettes flirting with luxurious crepes and velvets swaying with silks. The gorgeous jewellery was restricted to elaborate "kaan phool" that matched the grandeur of the ensembles.

Embroidery has always been a strong forté of the husband/wife team. There was intricate Meenakari recreating the beauty of ancient carvings, zardosi, zari, Marodi, silk cutwork with metallic and velvet fabrics and zari peeta work, which were the mainstay of the collection.

"The Royal Procession" was so stunning in its style and finery that it would have been the first choice of royal queens and their kings of days gone by. For a grand show stopping entry at a wedding or a formal event, the sensational collection by Shyamal and Bhumika will be the first choice.