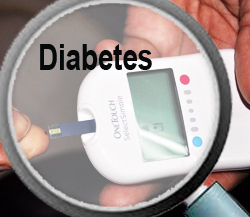 Diabetes has become a major threat for human being and it is also a great concern for the world of medicine. Despite the all suitable effort by the researchers and also by the latest developments in the field to control the growing speed of diabetics patients, the fact it that the number of diabetes patients in India is expected to reach 100 million by 2030, according to the latest Indian Council of Medical Research (ICMR) study. The another cause of concern is that the number of type 2 diabetics is rapidly increasing in our country.

To add to their woes, researchers in Mexico and the US have uncovered a new genetic clue that contributes to an increased risk of developing type 2 diabetes.

According to José Florez, associate professor of medicine at Harvard Medical School, “To date, genetic studies have largely used samples from people of European or Asian ancestry which makes it possible to miss culprit genes that are altered at different frequencies in other populations.”

He further added that by expanding our search to include samples from Mexico and Latin America, we've found one of the strongest genetic risk factors discovered till date, which could illuminate new pathways to target with drugs and a deeper understanding of the disease.

The higher risk form of the gene - named SLC16A11 - has been found in up to half of people who have recent Native American ancestry, including Latin Americans. The variant is found in about 20 percent of East Asians and is rare in populations from Europe and Africa.

Teresa Tusie-Luna, principal investigator at the Biomedical Research Institute, National University of Mexico said, “We are now using this information to design new studies that aim to understand how this variant influences metabolism and disease, with the hope of eventually developing improved risk assessment and possibly therapy.