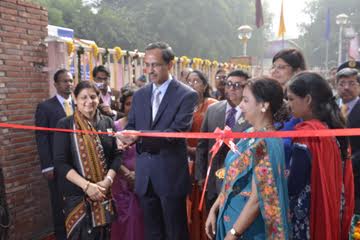 Maulana Azad Institute of Dental Sciences has organized Dental Health Utsav-2013 as the institute is celebrating 30 years of glorious distinction. MAIDS is a multispecialty hospital visited by over 1500 patients per day.

Every year MAIDS conducts the Dental Health Utsav with the objective of sensitizing and spreading oral health awareness amongst the public. Further to add some revelry to the occasion it also includes a variety of cultural events in this Utsav.

It began with Free dental check-up as part of the various community service programmes by MAIDS in which 500 patients were checked and were given free tooth pastes and brushes. Subsequently, a Dental Health Exhibition took place which showcased the various projects and models made by the students and was much appreciated by the attendees who got a very close insight to the various health problems and hygiene associated facts. Later an inter college Rangoli & Soap Carving Competition was organized by a team of students and faculty members in which various colleges participated. It was fascinating to see students being at their creative best.

The festival was officially inaugrated by S.C.L. Das, Secretary, Dept. of Health & Family Welfare, Govt. of NCT of Delhi who was astounded to see the talent of the students and the exhibition. He was all praise for excellence delivered by the institute. To mark the event a special cover was released by Chief Postmaster General, Delhi circle. Mobile dental clinics were also launched under NRHM scheme.

The inauguration was followed by the debate competition and later mehandi competition in which students from various colleges actively took part. After laughing hard all the participants and audience got a heat to their eyes by the nursing staff who presented a Haryanavi folk dance . And the evening ended with such music and splendor created by the intercollege dance competition.