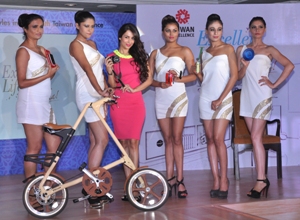 The Taiwan Excellence campaign 2013 in India, organized by the Bureau of Foreign Trade, Ministry of Economic Affairs of Taiwan, and implemented by the non-profit trade promotion organization, the Taiwan External Trade Development Council (TAITRA), announced the success of the Taiwan Excellence 2013 campaign at a Press Conferencein Delhi. The celebration witnessed a large gathering of eminent dignitaries from Taiwan, leaders in Taiwan's ICT, home, machinery and sports and leisure industries, top executives from Acer, Avision, Justime, KARMA and Malaika Arora Khan, the Taiwan Excellence spokesperson.

In 2013, TAITRA renewed its commitment to India with the theme "Fostering Excellent Lifestyles in India with Taiwan Excellence", a program strongly aligned to the consumer's sentiments. The Taiwan Excellence 2013 campaign was initiated in Mumbai early this year and has been engaging consumers and business associates across metros through various promotional activities. These activities have given Indian consumers the opportunity to personally experience Taiwan's superior quality products. Some of the key initiatives were: Taiwan Excellence Experience Zones in shopping malls of major cities like Mumbai, Bengalore, Kolkata and New Delhi; the cross-regional big Idea marketing event, Taiwan Excellence Cares; EMMA EXPO in Chennai and COM-IT in Mumbai.

Mr. Chung- Kwang Tien, Representative, Taipei Economic and Cultural Center (TECC) in India, from the Government of the R.O.C. (Taiwan), said, "The Taiwan Excellence campaign has become a comprehensive platform to showcase commercial exchanges between Taiwan and India. I am proud to inform that this year we have not only seen growth in the number of brand partners for the campaign in India jumping from 17 in 2009 to 60 in 2013, but have also achieved the objective of enhancing brand awareness among a new age of stylish Indian customers, from 4% in 2011 to 11% in 2012 for Taiwan's Information &Communication Technology products. We expect an even more promising outcome by the end of 2013."

Taiwan Excellence Cares wishes to give back to the community in each market and show that Taiwan cares and strives to bring positive changes to help shape a better tomorrow, while creating a "WOW effect" with fresh and innovative ideas to attract media attention and generate discussion among consumers, promote awareness, trigger interest, and inspire consumer desires for Taiwan Excellence brands and products.

Malaika Arora Khan, Bollywood actress, model and Taiwan Excellence celebrity spokesperson said, "I am very fortunate to be associated with such a prestigious campaign, as it transcends boundaries and strengthens relations between two progressive countries. I am proud to be associated with the campaign for the last three years as the celebrity endorser since 2011. It's a pleasure to know that Taiwanese brands foster a large fan base among the users of ‘Excellent Lifestyles' products." Talking about the ‘Taiwan Excellence Care' program, she added, "I think that Taiwan Excellence Cares campaign is very exciting and challenging! Through this campaign Taiwan aims to help the ones in need with its supreme offerings. I am proud to announce that 20 participants from India showcased their creativity and compassion this year. The campaign's success is exceptional and awe-inspiring!"